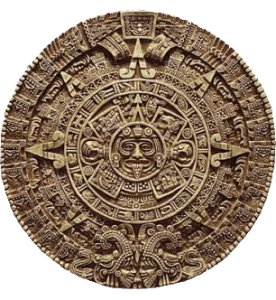 For me, 21 December is always a special occasion on account of it being simultaneously my wedding anniversary and the official start to my Christmas holiday. I’m not saying I’ve never picked up a pen or had a telephone conversation with a client on the ensuing days, but the twenty-first is definitely twinklingly auspicious and is ringed in scarlet on every calendar in the house. This year, it’s especially nice as it falls on a Friday, which happens to be the actual day of the week on which OH and I were married many moons ago.

However, it appears that 21/12/2012 will also be a red-letter day for every inhabitant of our planet, as we prepare to face the apocalypse. If you don’t already have this date marked in your diary, I suggest you do so without delay and perhaps embark on some celebratory plans of your own. I don’t know the science behind it, but the prophecy’s origins are Mayan, apparently, and plenty of people are embracing the possibility of a complete collapse of human civilisation. Not the retailers of the western world, naturally, as the fact that it falls inconveniently this side of Christmas would inevitably result in a drop-off in sales during Advent (no point in stocking up on gifts if they’re never going to be opened, right?) although, there’d likely be a sharp increase in the turnover on booze (equally no point in contemplating the end of days sober as a judge).

While it’s everyone’s prerogative to prepare to meet their maker in the manner of their choosing, I can’t help but feel sorry for the 176 residents of Bugarach. For some reason – possibly its famously mystical mountain, Pic de Bugarach – this sleepy village in the French Pyrenees has been designated as the only place on earth to survive the apocalypse. Which is nice. Trouble is, I’m thinking there won’t be anywhere near enough accommodation for the hordes of apocalypse-fugitives from the rest of the world. In fact, if you think Mary and Joseph had a tough time getting a room for the night in Bethlehem over the Christmas period a couple of thousand years ago, spare a thought for visitors to Bugarach in a few weeks’ time.

As you might expect, there’s some little anxiety in the village and Mayor Jean-Pierre Delord has had to seek advice from the government on the possibility of introducing special security measures to prevent any unpleasantness. Naturally, the journos are already flocking in to talk up what is, admittedly, a cracking story, much to the bemusement of the locals who remain resolutely sanguine about the whole affair. When asked if he believed in this particular apocalypse theory, Mayor Delord sensibly responded: ‘Of course not, this is the 183rd end-of-the-world prophecy since antiquity.’ And you can’t argue with that. Though I’m wondering if I should bring our anniversary celebrations forward by a day, just in case – I’d really hate that champagne to go to waste.