Is there any more unedifying sight than that of grown-ups trading virtual punches in a war of words over a plate of food? I’ll readily admit there are plenty of subjects over which I think it’s not worth breaking into a digital sweat: reality TV, Morrissey, Marmite (come on, you either love it or hate it, what’s to discuss?). But über-chef, Claude Bosi’s recent Twitter spat with amateur food blogger, James Isherwood, has to take the biscuit – or perhaps, in this case, the tuille.

A brief catch-up for those who may have missed it. Mr Isherwood dined at Chef Bosi’s acclaimed London restaurant, Hibiscus, and followed – as is apparently his wont – with a review on his eponymousDining with James blog. So far, so run of the pepper mill. To the uninitiated, Isherwood’s three-out-of-five-stars opinion may appear to be relatively uncontentious – surely even Michelin-garlanded chefs have to endure the occasional mediocre review – but Bosi was incandescent at what he considered to be Isherwood’s legerdemain and took to his keyboard to denounce the diner in the simplest terms possible, with a single bile-filled expletive. 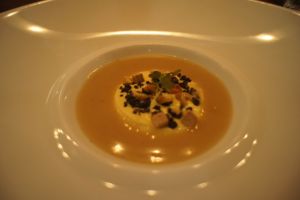 Now, it could be that calling your customer a c*** on Twitter is a bold new marketing strategy designed to create a bit of a buzz. Had the invective been aimed at a professional food critic, it might even have garnered a little sympathy, but Isherwood’s amateur status only served to whip up a bitter backlash that left Bosi – and a few celeb-chef supporters – with egg on the face. Leaving aside the personal insults, I suspect it was Isherwood’s reference to Findus Crispy Pancakes that caused the Bosi bile to rise. After all, no chef toils for years in a sweaty kitchen only for his breaded crab to be compared to a popular 1970s frozen convenience food (although, if my positively Pavlovian response is anything to go by, I’m guessing that Findus may well emerge the real winners).

For me, the interesting outcome of the emergence of this story in The Guardian was not so much the mechanics of the spat, more the issue of whether or not someone only has the right to report on a subject of which they have expert knowledge. There were certainly plenty of comments that poured scorn on the proliferation of blogs by ordinary people who have only a limited knowledge of their subject matter, viz. Isherwood. One of his detractors suggested he get ‘a proper education’ on fine dining before attempting any further restaurant critique.

While I appreciate that no-one without appropriate medical training should be offering a diagnosis on your bunions, for instance, I’m not sure we should be discouraging people from sharing their experiences of restaurant food or hotel accommodation. What next – compulsory work experience in a Tuscan vineyard before your recommendation of a nice bottle of Chianti can be taken seriously?

My favourite comment was from a grounded Guardian reader who declared that after 30 years of eating three meals a day, he felt pretty well qualified to make a judgement on whether or not he’d enjoyed his food. Power to the people.